Fedallah, 1988, Mixed Media on Aluminum
(Photo:  Gayle Alstrom)
[You might want to read my post entitled “The Frank Stella Retrospective at the Whitney,” on my other blog “One American Mind.”]
This is a very short video about Stella that really helps tremendously in understanding his work:

(above:  The Hudson River with New Jersey buildings–from the South side, 5th floor, of the Whitney.  Photo taken around 7:00 pm., which is why buildings are in shadow.)

The Whitney is open till 10 pm Thursdays, Fridays, and Saturdays this summer.

Performance art became a big thing during these two decades, which is something I never really took to, probably because I didn’t understand it.  Performance artists usually document their work with photographs, which many are on display at the Whitney. The lecture lasted about a 1/2 hour, then we went to the fifth floor to look at examples of work on display that had been talked about in the lecture.  All by artists with whom I had been totally unfamiliar until last night.  These lectures are free to members of the museum.  It’s certainly worth the price of joining just for them.

These performance artists express some kind of social agenda, like Aids, or women issues.  The women’s movement became big in the 70’s after the Vietnam war ended, and women performance artists dug their nails into it.  Performance art is a much more in-your-face” type of thing than looking at a painting.  However, when I think of the 80’s in art, the first people who come to my mind are Basquant and Warhol.  I don’t think any performance artist would come to any one’s mind.

“Museums are places to hang out.”

The 5th floor of the museum has two wonderful wall-to-wall windows on each side.  One faces south and the Hudson River, and the other East.  The windows have long couches in front of them for people to sit and contemplate and take photos if they want, which is what I wanted.

I couldn’t leave this topic alone without including Frank Lloyd Wright, my favorite all-time architect, whose work exemplifies ‘Lines to Patterns.”  These are photos I took at the Frank Lloyd Wright Room at the Metropolitan Museum of Art.

This photo was taken when the sun was about centered overhead thus making the square shadows from the ceiling windows so uniform in size in the courtyard of the American Wing at the Metropolitan Museum of Art in NYC.  The building in the middle facing the viewer is where all the galleries of the American Wing are located, including the great “Washington Crossing the Delaware.”

As I’ve mentioned before in several of my blogs, I’m a great admirer of the Ghanaian artist, but based in Nigeria,   El Anatsui (b. 1944).  I think why I love him so much is because he uses found objects in his art and I like to do that, too.

His first solo exhibition in a New York museum at the Brooklyn Museum of Art features over 30 works in metal and wood that transform appropriated objects into site-specific sculptures. El Anatsui converts found materials into works of art that are breathtaking.  I can hardly show anything here, to see more,visit the Brooklyn Museum’s website.  It was very hard to choose what to show.

He also has a work exhibited on New York City’s Highline this summer.  Following are photo’s I’ve taken of his work at these two places.

El Anatsui doesn’t cut and attach all these can tops by himself. He has an army of assistants who do the hard labor. I’ve heard that as a criticism of his work, how he makes these African workers do this tedious work to impress the Western Art Market. My opinion is that almost any work is better than no work at all. I think the work isn’t so bad if one knows that they are making a contribution to something grand, like a great piece of art. Like the men who built the Brooklyn Bridge, which was horrible work, but after it is done, they can look at the bridge and be proud that they were part of building such a grand and beneficial object.

“The forms resemble large woven bags that became known as “Ghana must-go” bags in the early 1980’s, when Nigerians hostile toward Ghanaian refugees…suggested they pack their belongings in such sacks and return home.”

Now we move to the Highline in Manhattan. The Highline is an elevated park that runs between the Hudson River and Manhattan’s Chelsea and Meat Packing Districts.

I was surprised that this work is covered up from the front by trees and bushes. As you can see it’s on the side of a building. El Anatsui said that he used the mirrors to reflect the buildings of the city so as to make it a reflection of the city.

Also check out, on line, the Jack Shainman Gallery, New York, which shows much of his work.  You might also like to check out my other two posts about him:  “El Anatsui’s Masterpiece at the Met,” and “Why Art.”

[header photo:  5th Avenue at Sunset on a normal day]

Once a year on Fifth Avenue in New York City, traffic is cut off for a mile along an area called the Miracle Mile, which is a mile where all the art museums are located. This mile includes the Metropolitan Museum of Art and the Guggenheim.

For a few hours, people are allowed to congregate in the street and visit all the art museums for free. Many street entertainers and vendors also try to capitalize on this event.

The Guggenheim Museum provides free sidewalk chalk for kids, young and old, to draw in the street on 5th Avenue outside the Guggenheim.

Old Middle-Eastern Rugs from the Metropolitan Museum of Art

Every year from May through October, the Metropolitan Museum of Art has their roof garden open with a new exhibit. This summer’s sweet delight is called Cloud City by Tomás Saraceno, an Argentinian artist.

Today, I visited the exhibit and took a few photos. This year, as it was year before last with the exhibit called Big Bambú by Doug and Mike Starn, It’s an interactive structure. This one instead of bamboo-made is all mirrors, glass and steel (however, visitors couldn’t go up into Big Bambú unless they were a VIP).

Visitors can look at it externally, and/or can get a free ticket and climb the steps up to the top of it on the inside, which I did. The tickets are for the reason to limit the number of people at the same time in the delicate structure that can only hold only so much weight. The Met issues tickets for every 15 minutes, which is about how long the walk from the bottom to the top and back to the base takes, including pauses to take in the views. I went to get my ticket around 1:30 p.m. and couldn’t get a ticket until the 3:00 p.m. climb.

One isn’t allowed to take photos from the inside, only from the outside. If you bring a camera with you, the Met provides a locker for you to lock your camera and belongings up before you go climb the stair up into Cloud City.

Being in the glass, mirror and steel structure feels somewhat like being in a room of mirrors in an amusement park, except you are in a much smaller space in the fresh air and get to see nice views of the City of New York around Central Park.

Perhaps it’s called Cloud City because one is supposed to feel as thought they are in a cloud, but I couldn’t equate it to that. I imagine a cloud as being peaceful, like when one is flying through clouds on an airplane. Being inside this structure isn’t peaceful. It’s disconcerting.  The purpose of the small panes of glass is to break up the view to the outside and to give one a different perspective of their space.

The entire point of the structure is to give a person a different experience as far as their relationship to space is concerned.

The Met has a bar on the roof near the sculpture where you can buy one of their over-priced alcoholic beverages ($8.00 for a bottled beer, $12.00 for a cocktail–however, the money goes to help support the museum).  I guess that’s for people who feel they need some fortification for looking at Cloud City.  Or else, after you see it, if you feel you need a drink, there’s a bar right there to serve you at $12.00 a shot.  The museum is probably cleaning up.  You are allowed to drink while looking at Cloud City from the outside, but you aren’t allowed to drink while inside. Cloud City could make you feel tipsy without any outside help.

When I paused on my walk to the top, a guide asked me if I were okay.  She said that when people paused on their climb to the top,  it was often because they felt dizzy or nauseous.  I told her I was fine.

Even if you aren’t interested in Cloud City, just being on the roof of the Met in the summer and looking at Manhattan and the park around you is a wonderful New York City experience.  As for myself, I like these interactive art projects. 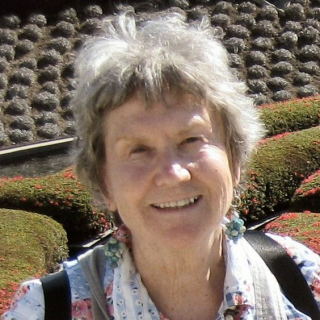 I live with a cat in Staten Island, New York, USA. Sometimes I write; sometimes I paint, I take photos and Tweet much too much. B.A. in Humanities

Recent Posts: A Few Words in Some Kind of Dubious Order

(above photo:  My Mother and I,  1958, when I was 16.  We lived on Wilshire Blvd. Just west of the Beverly Hills City Limits sign on Wilshire.) Although I’ve changed from Z to A during my 74 years, there hasn’t been any change in my taste in music since I was first cognizant that music […]

In response to the Daily Blogging Prompt Chaos Yesterday, I watched on video the film “The Big Short.”  The first time I watched it, I could hardly understand anything at all even when they were demonstrating examples of an idea with a visual metaphor.  However, I thought I would give it another try, and the […]

In response to the Daily Post Prompt:  Disaster I find that even though I, at 73, can still walk quite a lot and exercise at the gym 2 or 3 times a week, physical activity makes me increasingly more tired. Yesterday, I took the #17 Express Bus from Staten Island to 14th Street and 7th […]

In response to the Daily Post Writing Prompt: Money for Nothing A few years back, I had just come from having an over-priced Irish Coffee at The Boat House in Central Park.  After walking through Central Park, I boarded the “R” train to take me to 14th Street, where I planned on shopping at Whole […]

Another Day on the Subway

In response to the Daily Post Blog Prompt:  Fleeting What I was doing in Queens 5 years ago, I can’t remember, but I know it was time to start home.  Caught the subway to take me into Bowling Green in Manhattan from there I could catch the ferry to take me back to Staten Island. […]